Blizzard obviously doesn't care anymore, nothing I can do. :-(

The latest news about the site.

Team page now have an option to filter by race or show best race.

The team graph and world/region/league rankings are now calculated with MMR where applicable. League backgrounds are disabled for mmr since league boundaries overlap by a lot.

Next up is multiple mmrs per team in 1v1.

Blizzard finally added MMR to the API. I have now added MMR to the ladder page, this is now the primary sort order for ladder ranks. I haven't decided if I will add league and points back as a sort order, I feel it is not very high on the prio list.

Next up will be MMR for the team rank over time graph. Also I will try to update last season with MMR. This will have some nasty side effects since it is only possible to get the rankings from the season end. So unless I want to do some complicated mixing of how ranks are displayed/calculated I will have to scrap all data points but the last from season 28 and from season start until now for season 29. We will see. If you read this far and have an opinion now is the time to shout.

The last two seasons Blizzard has sorted GM on MMR. That is the order it is received through the API (even though the actual MMR value is not in the API). GM is now shown as is from Blizzard (MMR order), rather than resorted using points as it was before.

This have been updated for both season 28 and season 29.

When calculating world rank the different GM leagues for the different regions will be interleaved. It will look a bit strange, but comparing regions is a strange thing to do, so I think it is fine.

Blizzard added a new API so it is now possible to get information on tiers. Ladder is now updated with tiers and rankings from last season have been fixed.

Not possible to get tier data for SEA yet, so not fixed for SEA.

Separate MMR for different races was introduced this season (season 5 2016). For now this will be handled by only showing the best rank for each team. Rankings for the other races will be filtered out and not shown nor counted.

I will probably fix this in the future, maybe adding a filtering option for it. The reason for doing it like this first is because it is the simplest solution.

As a consequence of the Ladder Revamp where each ladder is now one of three tiers, ladder ranks on the site are no longer accurate. The tiers within a league are currently mixed up since tier information is not yet available in the Blizzard Battle Net API. This means that a tier-3 800 points master player will be displayed higher ranked than a tier-1 700 point master player.

Clan ladders are now available. Clan ladders are limited to members ranked in the current season, 1v1 and LotV. At the moment I have no plans to add anything else please tell me if you don't agree with this.

I am aware that linking to clans on the site is a bit lacking (for example can't click on clan tag in the regular ladder or in player search results). I will probably address this later (and there are other usability issues as well), but I have a few behind the scenes issues and bugs that I need to fix first.

As of public request the ladder data now updates more frequently (this is the fast hack version, so don't expect to work flawlessly yet). Grandmaster (1v1 and Archon) will be updated approximately once a minute (then there is a delay of 1 - 2 minutes before data appears on the site, this will be tuned later). 1v1 platinum to master will updated continuously but not more often than every 10 minutes, in practice this will mean every 10 - 20 minutes depending on the region and how fast the blizzard api responds at the moment. All other divisions will also be updated continuously but not more often than once an hour.

There will also be a daily window of about 1 hour (around 08:00 UTC) where there will be no updates. This will hopefully be removed later. The plan is to also remove the window of no updates around season breaks (this is now 5 days or so).

This feature experimental so don't be surprised if updates are slower, the age of the data will be displayed in the ladder.

Legacy of the Void for all modes (including Archon mode) is now supported in ladder, stats and team history sections.

Added a section for the current ladder standing. All versions and modes are supported along with various sorting options like ladder position, wins, losses etc. Filtering on race, region and league is also possible.

Team game data have been fetched since the start of the site but never been on the actual site, now they are. Both stats and rankings are available.

Ads was added as an experiment about half a year ago. It turned out that the ads generated zero income for the site (only for the ad provider). There no reason to make the site ugly and give money to any possible ad providers so ads have been removed. However the site still costs money to run and it would be nice if the visitors of this site was willing to contribute to that, so a donation link was added. Donations are appreciated, not required.

The intention with the active rank was to have a more accurate estimate of skill progress, but it turns out it is not so I have removed it. I have a few ideas to replace it with something better soon™. 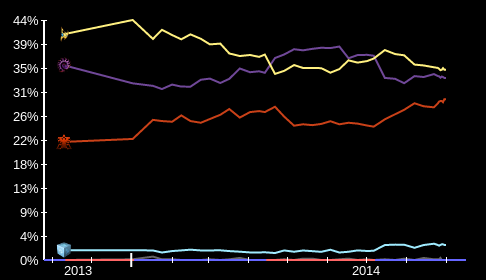 The second statistics page added. The number of ranked 1v1 players over time.

As a bi-product of tracking sc2 ladder rankings for all players the statistics section was added, more statistics will come but the ladder distribution history is the first one out. 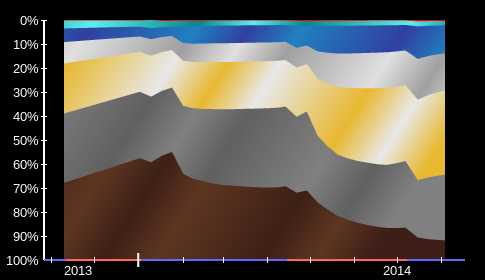 The first version of the site goes live with 1v1 data accessible. Team history is the only feature available. 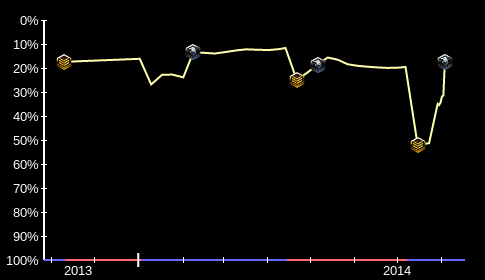 Data collection of sc2 ladder for the site is started. Using the Blizzard Battle.net ladder API the current ladder standings are updated every day.